Iĺm Francesca Zoccoli, I study at Naba academy in Milan and Iĺm in my third year in Fashion design.
This path has helped me to realize what I was not able to express before.
I found a key to understand the world, which helped me to understand also myself.
Creativity always accompanies me evolving with me according to this process:
It is like a flow of energy that I feed every day with passion, work and joy.

ôANIMA MUNDIö (The world soul) is an intrinsic connection between all living things on the planet, which relates to our world in much the same way as the soul is connected to the human body.

Nowadays man is constantly engaged in an attempt to dominate nature: he often does not realize that he is part of it, that he breathes, that he inhabits the planet.
The collection anima mundi is inspired by the need to find a new balance between man and the planet.
Man is free to decide what his path will be, but his choices have a consequences for the future. He imprint a trace in the place which he lives.
I tried to express all these concepts through the visual metaphor of abandoned statues, ruins where natural sphere and the artificial one are no longer divided but united as a whole.
I have mixed fabrics such as linen and wool with waterproof fabrics, and in the same way light and round shapes with heavy volumes and more rigid shapes to emphasized the connection with the ground.
Once man recognized the earth as home and his role in relation to the universe he reaches a new sensitivity:
He lets himself be covered by nature that acts undisturbed, and which, shrouded in silence and mystery, regains possession of its spaces, architectures, objects, which dissolve over timeů 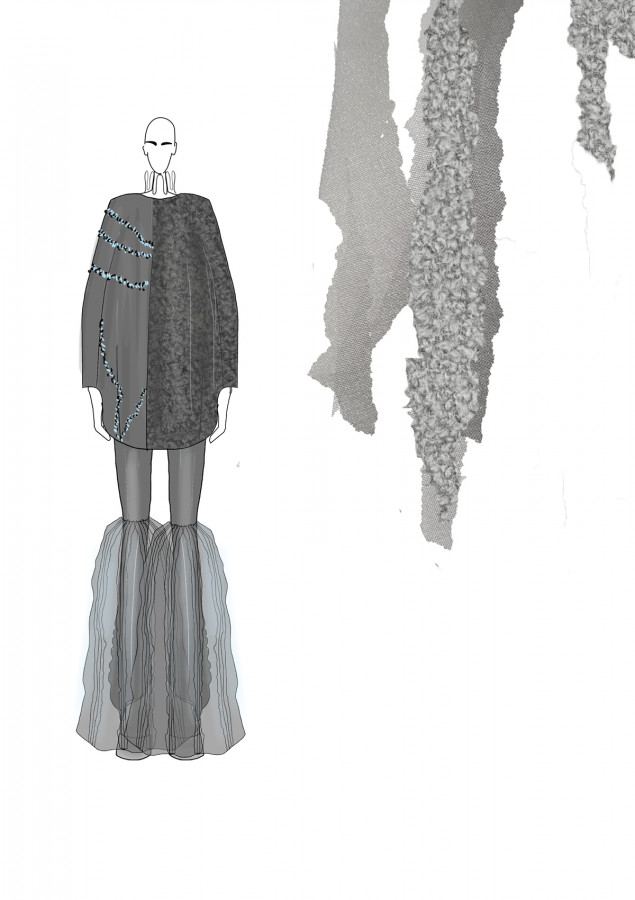 The Zeta brand was born from the first letter of the surname Zoccoli.
In addition, Zeta Oph is also the name of a star on the run in the universe that like a ship produces a very evident arc-shaped wave traveling fast in the Cosmic Ocean.
The idea is to associate Zeta with a hypothetical reality that is never static, fleeting, timeless and in constant evolution. A dream journey in search of ourselves.
These characteristics can be seen in the institutional graphics made up of lines and signs that refer to this concept.
His first collection "Anima Mundi" underlines the relationship between living beings and the planet in close contact with each other almost to become a unique "being".
For the shooting, the video and the fashion show, I was inspired by the concept of the man who let himself be clothed in clothes and nature, in an abandoned place but at the same time full of natural elements that seek their own place on Earth.

My name is Seyla Grassi, I'm twenty-one and I live in the province of Bergamo, Italy.
Since I was a child I have always been passionate about fashion and art and for this reason I chose to study at the art school and continue my path at Naba, Milan following the Fashion Styling and Communication course.
The aspect I like most about fashion is that it is multicultural, without gender differences and inclusive of issues that are very important to me but above all to the society in which we live.

BACK TO ALL PROJECTS